Real Good Fish | People | | Geoff Bettencourt | Geoff is a 4th generation commercial fisherman. His personal story and the stories he tells of his father and grandfather weave throughout the...
Perhaps I should not have been a fisherman, he thought. But that was the thing that I was born for.
- Ernest Hemingway, The Old Man and the Sea 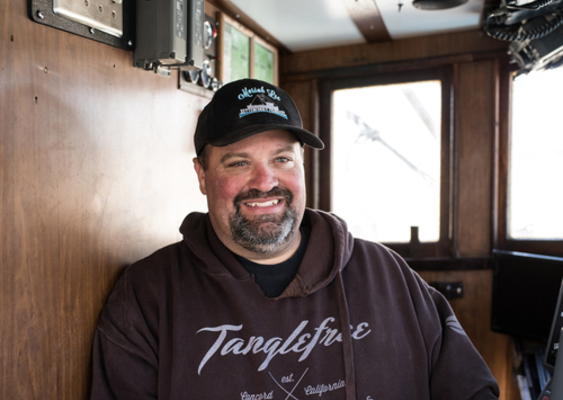 Geoff is a 4th generation commercial fisherman. His personal story and the stories he tells of his father and grandfather weave throughout the history of fishing in California, at a time when crab was sold by the dozen, and measured from front to back, not side to side.

His boat, the FV Miss Moriah (at the time named Mary Vincent), was a boat he fell in love with as a child. Built in Moss Landing, it was one of the last boats built by Martin Allen for Bill Mertha. In 2016 when Geoff was looking for a boat, his dad told him to “Call Bill.” The boat wasn't on the market, but he had a feeling that he was ready to pass it on to the next promising fisherman. Bill and Geoff made a deal. Geoff deconstructed the boat to expose every wire, hydraulic, and frame. Learning every inch of the boat he reconstructed it with intention and attention which meant a new engine, and lots of stainless steel. There is something to be said about a fisherman and his boat. As Geoff proudly describes FV Miss Moriah: “You’d be hard pressed to find a more well-rounded boat. It's fished salmon, albacore, crab and now groundfish”

Geoff is a member of the California Groundfish Collective and, together with his sister Lisa, runs Bettencourt Fisheries and Morning Star Fisheries. They are one of the few boats on the coast reimagining the future of trawl boats at the intersection of sustainability and new markets.

Geoff’s favorite fish to cook is petrale and chilipepper rockfish - baked. “Just a little olive oil, some spices, light smear of pesto when finishing. Baked halibut is great with shaved macadamia nuts right at the end. Lightly toasted and browned.” One of his favorite classics is halibut wrapped in bacon.

When asked what he is hopeful for he said “I’m happy to see young guys in the fishery. I really want to see the heritage continue.”