Real Good Fish | People | | Jerry Wetle, Jr. | Jerry Wetle, Jr. Jerry is a mover and a shaker in the local seafood industry. Born and raised in Monterey, he commercial fishing at the age of...
Perhaps I should not have been a fisherman, he thought. But that was the thing that I was born for.
- Ernest Hemingway, The Old Man and the Sea 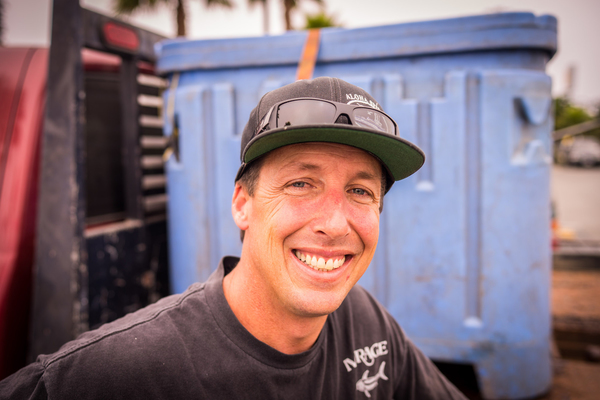 Jerry is a mover and a shaker in the local seafood industry. Born and raised in Monterey, he started commercial fishing at the age of twelve on a charter boat named “Sir Randy”. He earned his sea legs bouncing from charter to charter, until one day he hosted a group of chefs who were shocked by the quality and care for the fish they landed. “We can’t get fish like this in our restaurants,” they told Jerry. At that point Jerry knew there was an opportunity to provide California restaurants with premium, local catch, and his career has been focused on that mission ever since.

In 2008 Jerry bought his first boat, the F/V Mary Hallie, a 26 foot Radon. With a growing demand and business that quickly surpassed the capacity of the Mary Hallie he bought another boat the next year, the “Spirit One”. Jerry proudly started working with the Monterey Bay Aquarium and helped build its sustainable seafood program with their head chef at the time. As he grew he invested in more boats.  “Atun”, “Wanderer”, and the “Pacific Spirit” are the names of a few of his boats. To manage that fleet he recruited his father, who was a contractor in the area: a rare instance of son handing fishing off to his father!

Jerry’s most recent boat is the F/V Pacific Bully, a 50-foot custom fishing vessel built in Nova Scotia. This boat is designed to fish Dungeness crab, black cod, and salmon and has state of the art refrigeration to ensure the highest product quality.

As a pioneer in the seafood sustainability movement, Jerry not only promotes sustainability but participates in important fisheries research. He ultimately wants to pass this down to his kids, specifically his twins, Jake and Luke.