Real Good Fish | Fish | | Rock Crab / Romaleon antennarium | Bringing you the freshest sustainably caught LOCAL seafood!
If we eat from our own shores, we're much more inclined to protect them, the water quality, and our marine environment.
- Paul Greenberg, American Catch 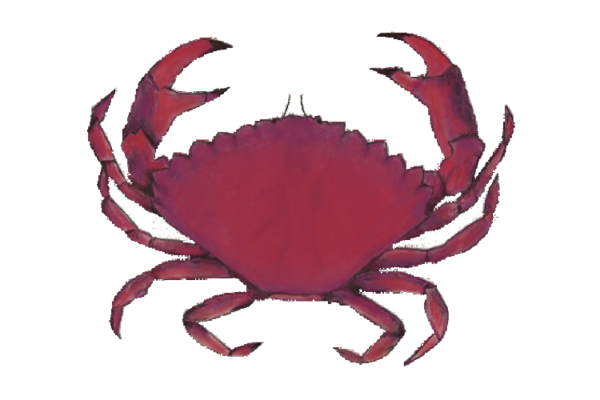 Also known as the Pacific or California rock crab, this nocturnal crab has eleven teeth to either side of the eyestalks. It is found at depths of no more than 300 feet, but usually around 150 feet deep. Their habitat of choice is low rocky intertidal areas, where they bury under rocks or in kelp beds. They are great scavengers, relying primarily on small bits and pieces from small fish and hermit crabs, which they capture by gradually chipping away at the edges of their shells until the hermit crab has nowhere else to go.

Culinary Tips: Rock crab don't have much meat in their bodies, but they have large claws that are typically pre-cooked and sold on their own as a perfect appetizer or a beautiful addition to a seafood tower.

Sustainability: Rock crab are a less targeted species off the Central Coast due to the prevalence of larger Dungeness crab, so fishing pressure is generally lower. Traps use to catch rock crab do not disturb habitat and have very low bycatch.