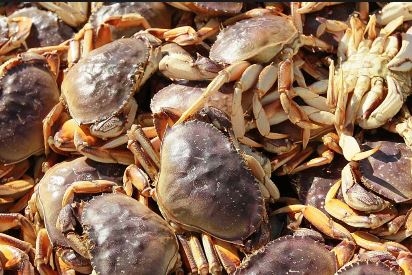 The California commercial Dungeness crab fishery came to an abrupt end on April 15th due to a legal settlement aimed at reducing the potential for whale and sea turtle entanglements in coastal waters. This closure is the result of a lawsuit filed by the Center for Biological Diversity (CBD) that alleged the California Department of Fish and Wildlife (CDFW) “[ran] the crab fishery in a manner that effectively created what the plaintiff’s lead attorney once called a ‘minefield of crab traps’ for marine creatures.” (Press Democrat 2019).

This was a shock to California crabbers who were only given three weeks to land all their gear. For many vessels this was a huge undertaking. Some fishermen had a few hundred pots in the water when the closure was announced and could only bring in a couple dozen at a time. “My last trip in was dangerous because I was rushing and had to deal with bad weather,” said Monterey Bay crab fisherman, Dave Toriumi. “Even a few extra days would have been very helpful getting pots to shore in time. It came down to the wire, and there's still some gear out there.”

“It’s a huge blow, economically,” said another crab fisherman, John Cooley to the Press Democrat, “on top of many, many others.” Environmental factors like toxic algal blooms have impeded the Dungeness crab fishery in recent years. Waning participation and financial challenges have been an issue in this fishery, even before this most recent closure.

The CBD’s original lawsuit was in response to a spike in whale entanglements reported in 2014. Federal data showed 23 entanglements in California caused by crab gear in 2016, 22 whales and 1 sea turtle. However, the CDFW presented data in its defense that crab pot-related entanglements have actually decreased since 2016. The ensuing legal battle culminated in an agreement to close the 2019 fishery two months early.

The response from the crab fleet was dismay, especially considering new legislation enacted on January 1st, which granted power to CDFW director Chuck Bonham to utilize the Dungeness crab gear working group’s advice to respond to and suspend the fishery if entanglements became a serious problem. This new law was specifically designed to appease conservationist groups who felt the state was not dynamic enough to address entanglement and bycatch issues.

There also isn’t a clear solution in the settlement that can be practically applied next year to avoid entanglements. Break-away gear has been proposed in the past, but some fishermen are not sure of its durability in large swells. Acoustic buoy gear to scare whales away was another suggestion, but Calder Deyerle, a crab fisherman based in Moss Landing, CA, and a member of the California Dungeness Crab Fishing Gear Working Group told us, “that technology hasn’t been tested extensively, and there is limited data on how it effects some other marine mammal species in the area like harbor porpoises.” Toriumi agreed: “I don’t think there is any kind of technology right now that will work better for this fishery. Some of the gear proposals will only be feasible for larger boats, pushing smaller fishermen out of the fishery.”

All California fishermen are concerned with the precedent this closure may set for next season with no clear gear resolution in place, and what it might mean for other fisheries that could potentially interact with sensitive species. 174,025 crab traps are permitted each season in California, which yielded 23 entanglements in 2016. The CBD considered the ruling, “a great victory for whales and sea turtles off our coast.” But for crabbers who generated $47 million off the boat in 2017 for Dungeness crab, shutting down the season for entanglements occurring in %0.013 of deployed traps, is a very tough pill to swallow.

Toriumi is concerned about the precedent this ruling could set for other fisheries in the area, particularly salmon. He explained, “there are probably going to be salmon fishermen photographed near whales this year in Monterey Bay. The Dungeness crab lawsuit began with photographs, and I’m worried the same could happen this year with salmon.”

“It shows the necessity for being diverse in your fisheries,” said Deyerle, “even in the best managed fisheries there will be downtimes and unexpected circumstances. Diversity in your fisheries portfolio is imperative for survival.”