Real Good Fish | Blog | | Who Fishes Matters: Creating New Opportunities for Local Fishermen | Who gets access to local fish? Itâ€™s the question that founded our business, and itâ€™s a question we continue to ask ourselves. It...
< Prev Next > 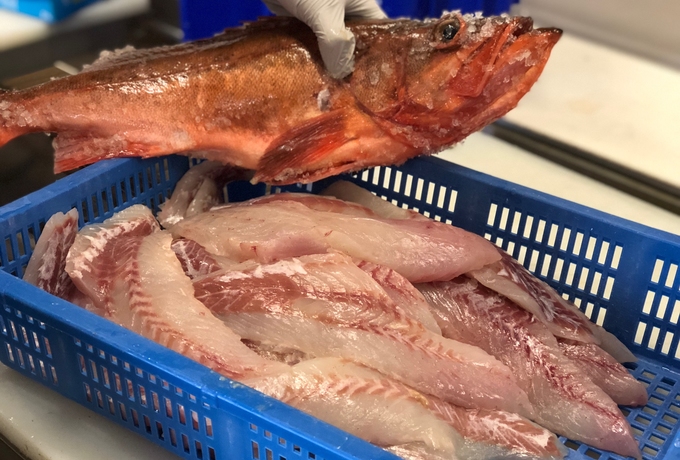 Who gets access to local fish? It’s the question that founded our business, and it’s a question we continue to ask ourselves. It was also this question that inspired our Bay2Tray program. We think it’s important to consider who in our society gets access to local sustainable fish, and how, through this relationship, we can have a more meaningful conversation about the future of two of our greatest assets: our children and the ocean.

In the past six months, Bay2Tray has provided local seafood for over 37,800 meals and hosted 59 fishermen in the classroom visits, reaching over 1545 students in our area. Bay2Tray is providing access to local, nutritious food for children and sharing enlightening stories from the ocean in their backyard. The Real Good Fish community made this happen! From our CSF members and “Bay2Tray Upwell” supporters, to our funders like the California Coastal Commission and Patagonia Santa Cruz, as well as the USDA, everyone has had a part in our success so far. It’s amazing what happens when you ask a simple question.

Last year, we asked the question again - “Who gets access to local fish?” - and we realized half the question was missing. Opposite our plates, there are fish and fishermen. Naturally, the next question is: Which fishermen get access to the fish in the ocean? The answer, similar to our farming neighbors on land, is not the small guy, but a shrinking number of large, powerful companies that are consolidating access to our ocean resources.

Small boat fishermen are losing access to their right to fish. This is partly because of high costs associated with meeting regulations, but also due to competition from neighboring countries like Canada, where fisheries are subsidized and the true price of fish is skewed. More specifically, in the case of the West Coast groundfish fishery recovery, there have been a lot of successes worth celebrating, but it’s only been a partial success. The groundfish populations are healthy and bountiful, but the market for this local fish is gone. They’ve been replaced by demand for cheaper imports of farmed tilapia, pangasius (basa, swai), and imported rockfish (“Pacific snapper”). It is important to remember that this is the beginning of a new era of fishing, and it’s up to us to define it and defend it.

Organizations are aligning to rebuild the market and address some of the challenges of who holds permits and quotas within our communities in Morro Bay and Monterey Bay. An important piece is missing: few fishermen remain, and entering the fishery is extremely - millions of dollars - expensive. The economic recovery of this fishery has yet to be seen. Not a good proposition for an eager young fisherman or a banker looking to finance his fishing ambitions.

So what is missing? A low barrier, affordable fishery that any aspiring fisherman can feasibly enter. In September of 2017, we at Real Good Fish got together with David Crabb of the Pacific Fishery Management Council (PFMC), Melissa Mahoney of the Environmental Defense Fund, and local fishermen to explore what such a fishery would look like. Collectively, we wrote a proposal for an Exempted Fishing Permit (EFP) to the PFMC describing our idea. The goal is to target abundant chilipepper rockfish and bocaccio rockfish with “fly lines,” which compose of a main line with 50 to 250 hooks, trolled at a slow speed at the same depth as the fish. The challenge is avoiding species of concern, like yellow eye (golden eye) rockfish. The fly lines are designed to avoid threatened species by keeping the hooks off the bottom where those fish typically reside. The full EFP is public and can be found here.

To give credit where it’s due, important first efforts were made several years back by the late Steve Fosmark, but unfortunately the project got hung up and wasn’t successfully tested. We built on that proposal, with a few important changes that include gear modifications to allow salmon boats to fish the gear, and a larger number of fishermen testing the gear. We submitted for preliminary approval in November, pending a few changes. Last week, June 8th, we submitted for final approval in Spokane, WA by the PFMC and were approved! The last step is federal approval through National Oceanic and Atmospheric Administration (NOAA) Fisheries. With their approval, we’ll be able to test the feasibility of this fishery in 2019.

If we get approved and are able to start supporting local fishermen in this fishery, you all have a really important and exciting role to fill: to be a fish lover, to tell this story, to celebrate this experiment in social and environmental equity. To remind the world that not all fish is caught the same, that where it comes from is just as important, if not more important, than what it is. That the GOOD in Real Good Fish is not just the fish, it’s you, it’s the fishermen, it’s our collective commitment to improve our ocean and fisheries, now and for the generations to come.