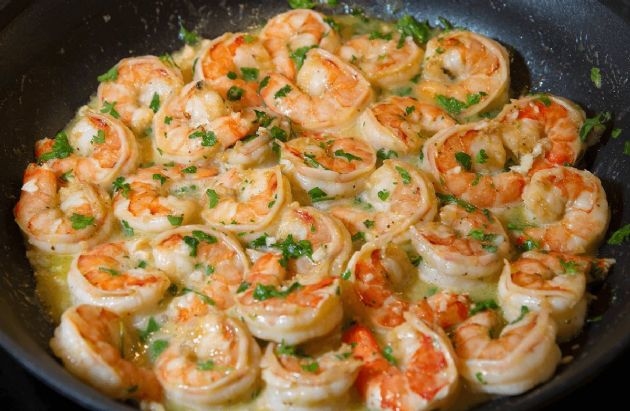 Step Away from the Shrimp Buffet!

Shrimp has managed to keep its cachet as a luxury product, while also being inexpensive and widely available. Party trays, with the pink snack hooked in a wreath around a pool of cocktail sauce, are ubiquitous at grocery stores. It’s the star of all-you-can-eat, deep fried with dipping sauce at seafood chains. People in the United States prefer flavor-neutral seafood, and most shrimp falls into that category.  It’s a sort of “chip of the sea” that makes an excellent vehicle for dips. Shrimp is by far the most popular seafood in the U.S., with each American eating an average of 4 pounds a year. It’s followed by salmon and tuna, at about 2 pounds per person. These three seafoods, out of thousands available, represent over half of all seafood consumption in the United States. And the reason shrimp went from upper crust to all you can eat? A whopping 90% is imported.

Shrimp is either fished with a trawl, or cultivated in farms. Both are problematic. Shrimp trawls have small mesh that drag across the bottom of the ocean, netting up many other species that are killed in the process. In fact, shrimp has the highest rate of bycatch of any fishing industry: by some estimates, 98% of the catch is discarded, leaving 2% as the intended catch. Imagine the waste in that “all-you-can-eat” offer.

Shrimp is also farmed globally, with devastating environmental effects. This has been particularly destructive on mangroves worldwide. In Thailand, 60% of the mangroves have been cleared. These are not only estuaries, where new marine life is born, allowing local fishermen and fisheries to survive, but also a primary source of protection from storms. As a further horror, many of these farms are linked to the epidemic of slavery on Thai fishing boats. With a hidden crew of slaves, they are called ghost ships. Not only do ghost ships supply cheap seafood to feed shrimp farms, but their slaves are also used to peel shrimp.

If you still aren’t convinced to get fussier about your shrimp intake, here's more. Since shrimp are highly perishable and have to travel far, they are often chemically treated. Tests by the Institute of Environmental and Human Health on shrimp imported from India and Thailand and sold in U.S. stores tested positive for nitrofuranzone, an antibiotic that's a known carcinogen, at levels 28 and 29 times higher than those allowed by the FDA. Another antibiotic, chloramphenical, was detected at levels 150 times the legal limit. This one is banned in the United States.

In case you were wondering why your Channel Island ridgeback prawns arrived still moving, it’s because Real Good Fish does not use any chemicals. We source California wild-caught ridgeback and spot prawns. Since they are both highly perishable and we don’t use any chemicals, they need to be delivered as fresh from the ocean as possible. Yes, it can be startling, but the flavor and integrity of the prawns is so worth it. They are sweet, clean and mild, with no chemical aftertaste and no ethical compromise.

They come from the Channel Islands, fished by Jeff Hepp who offloads them in Santa Barbara. He has two excluder devices on his trawl net. The one towards the bottom of the net is a "separator sack" that has five inch mesh to let fish out. Towards the top or "hood" of the net is a ten foot zipper that also lets fish out, so there's little or no bycatch. Jeff has also modified the bottom of his trawl net to minimize contact with the bottom and impacts to the environment. This is known as "light touch" trawling. Once transferred to Real Good Fish, the ridgebacks are put in seawater tanks pumped with oxygen and driven north overnight to be delivered in the morning.

Sometimes we get Channel Islands spot prawns from him as well. These are one of the most delicious things to come out of the ocean. Prepare them simply, and remember to not overcook them. Jeff Hepp’s favorite way to prepare ridgeback prawns? "I just boil them with a little salt and sprigs of fresh rosemary.”

Real Good Fish chef and fisherman Kevin Butler has come up with some simple, delicious preparations like Sriracha Ridgeback Prawns or a simple scampi. Go to our Recipes section for a few more of our prawn recipes or enjoy them in your own favorite preparations!