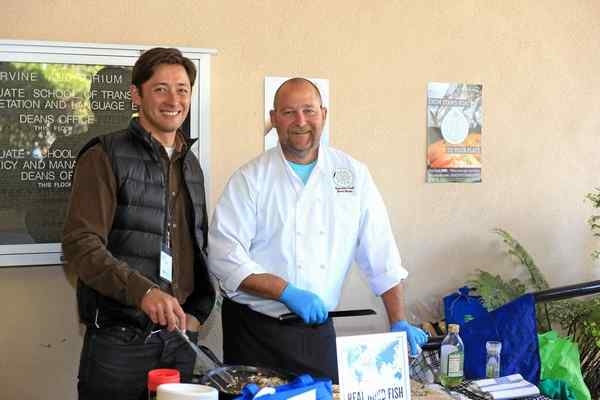 By Mike Hale, The Grub Hunter

It’s Tuesday morning and Real Good Fish founder and CEO Alan Lovewell is up before the sun — elbow deep in ink-black squid guts.

Dressing hundreds of slippery cephalopods was not in the original business plan for his community-supported fishery that connects individuals and families to local fishermen with weekly deliveries of sustainable seafood. But this is real life on the fouled, fishy front lines, and it’s all hands on deck — literally. On this day Lovewell and his crew meet the squid boat and offload a mess of the delicacy better known in these parts as calamari, before cleaning, packaging and delivering the catch to Real Good Fish pickup locations.

Each week as many as 1,200 Real Good Fish members from San Francisco and the East Bay to Monterey Bay have access to sustainable seafood straight from local small-catch fishermen.

Lovewell, the brains (and often brawn) of this operation, hatched the concept while earning his master’s degree in international environmental policy at Monterey’s Middlebury Institute of International Studies. He finished the business plan in 2010, and left the area only to return in 2011 to a flood of questions from friends, fellow students and professors about why he hadn’t launched the idea.

“The economy was still pretty grim, few job prospects and I was sitting with this business plan,” Lovewell said. “It was a time of my life with less responsibility and more optimism.”

So the former wilderness instructor jumped into the deep end, starting the business under the name Local Catch (he would later change it to Real Good Fish as a pre-emptive move to avoid a potential trademark dispute). Lovewell calls himself an entrepreneur who supports “greater system change in the interest of creating more sustainable and equitable relationships to each other, the ocean and our food.”

That resonated with consumers, and the people who hand out grant money to creative minds with sound business plans. Chase Bank officials sifted through 40,000 applications for its $100,000 Mission Main Street Grant. In the end one concept stood out from the rest: Real Good Fish ended up with the cash.

It allowed the business to add an operations manager and another van, and expand its capacity and distribution to meet growing demand. It also meant that Real Good Fish could make a more significant impact.

“At end of the day what we’re trying to do is provide food that is more inspirational, grounded in the place where we’re from, a connection to someone and something bigger,” he said. “We want to create an experience that has more depth.”

Lovewell never wanted to create a grocery store experience, but to “change that paradigm, and de-commodify our fish,” he said.

It’s much more than a piece of fish on our plate. Now we know exactly where it came from, where it was caught and by whom. The seafood is fresh, the carbon footprint is light and the experience is enhanced by thoughtful touches. The RGF newsletters contain helpful and educational information. The website (www.realgoodfish.com) provides fishermen profiles, a cache of recipes culled from top chefs, and a members-exclusive online store that sells unique seafood products such as smoked king salmon ravioli, uni butter, smoked black cod, boquerones (fresh anchovies marinated in vinegar; a Spanish delicacy) and many other products from in-house chef-fisherman Kevin Butler.

Lovewell’s idea not only helped consumers find easy roads to sustainable seafood, it helped local fishermen, many of them struggling to eek out a living. He wanted to help protect and maintain the local fishing culture, and knew that connecting consumers and fishermen in a tangible way would make a difference.

An initial 146 members signed up to support the fishery and the fishermen, and grew quickly, doubling in the first year. Today there are 1,200 customers getting deliveries at some point.

The week’s catch can range from squid, wild salmon, black cod, rock fish, and shrimp, of course, but also more obscure species that fishermen have long thrown back. Called “trash fish,” bycatch fish such as grenadier have proven popular with consumers — and the next generation.

Toward that end Lovewell started Bay 2 Tray, a program that delivers fish to select local schools that have now replaced the frozen fish stick meal with fresh grenadier tacos. The program also allows fishermen to visit classrooms and share their tales. The visits help teach children where their food comes from, and hopefully become future stewards of the ocean and our fisheries. It also models a life beyond the Golden Arches.

“Healthy food can have such an impact on our lives, community health, friends and family,” Lovewell said. “Everything is enriched when we place more value on food.”