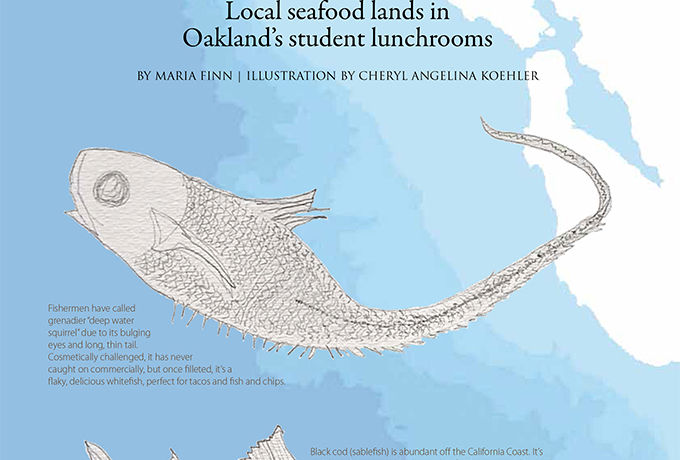 It’s an early morning in April, and I’m in the parking lot of East Oakland Pride Elementary School to meet up with Ernie Koepf and Aisling Mitchell for a presentation we are giving together. Koepf has assured me he’ll be dressed in “stereotypical fishing garb,” even though this Oakland resident is semi-retired and now spends more time playing guitar than catching fish. As I spot him in a broad-brimmed hat, plaid shirt, and suspenders, I have to laugh, since he looks more like a farmer than a fisherman—both of which are enigmatic in this East Oakland neighborhood.

Mitchell, who serves with FoodCorps (a national initiative to connect kids to healthy food in schools), runs a garden-enhanced nutrition education program here and in other Oakland schools. She has helped schedule Koepf into the slot normally reserved for her health and wellness classes. “If children have the opportunity to plant, care-take, harvest, and cook their own produce, they are far more likely to not only try new fruits and vegetables but love them and tell their family about them,” she says, explaining her mission.

Local commercial fisherman Ernie Koepf explains the different seafood species caught in California waters to students at East Oakland Pride Elementary School.
Our pilot program with fishermen visiting the schools has a similar hope: If school children meet people who fish, they could become enthusiastic about local fish in their school lunches. Appropriately, fish tostadas are on the week’s menu.

We carry Koepf’s gear down hallways decorated with inspirational quotes and pictures of civil rights leaders like Harriet Tubman and Martin Luther King, Jr., then outside and back through a packed dirt yard to temporary classrooms in trailers. We pass Mitchell’s teaching garden, where grapevines and flowers spill through a chain-link fence.

Koepf rigs up a video on how deep-water fish are caught with hook and line as we set up his signboards showing species and maps of the California Coast. The students take their seats and Koepf begins. He describes his work on the San Francisco Bay as a herring fisherman and his past experiences fishing crab and salmon. One little girl asks, “Do you ever feel bad killing fish?”

I add that I do feel bad sometimes, “but when I feel guilty, I try to feel grateful to all the fish instead.”

My own story is that I used to fish commercially but currently work with the company Real Good Fish. We operate a community-supported fishery (CSF). This is like a CSA program, but members get fresh-caught, local seafood shares instead of fresh-picked veggies. Member pick-up sites range from Monterey County to the East Bay. Our mission is to create the opportunity, through food experiences, for a visceral connection between people and our coastal ecosystems in hopes that they will take stewardship of them. If there’s a problem—like the domoic acid caused by an algal bloom last year that made Dungeness crab toxic, or water being siphoned from rivers, thereby hurting wild salmon habitat—then we as consumers are aware of this and can help find and advocate for solutions. However, local seafood isn’t cheap. That means that much of the population is excluded from the pleasures and lessons it brings.

To help remedy this, Real Good Fish founder Alan Lovewell started a school lunch program called Bay2Tray. He looked at those with the least access to good seafood and found that they are children, particularly in school districts where well over 50% receive free or subsidized meals. “In school districts like Monterey Peninsula and Oakland,” says Lovewell, “approximately 70% of the students qualify for free or reduced meals, indicating that they are living at or below the poverty line.”

The Bay2Tray program was piloted in Monterey Peninsula Unified in 2014. This past year, it grew to four more districts, including the largest to date, Oakland Unified School District (OUSD), which serves over 30,000 lunches per day.

OUSD’s school lunch budget of $1.25 per day per student must cover a protein (one ounce for elementary school children, two ounces for middle and high school students), milk, fruit, vegetables, and grains. Despite these constraints, OUSD not only sources from Real Good Fish, but also from Mindful Meats and Mary’s Free Range Chickens, two local, sustainable companies. Alexandra Emmott, the OUSD Farm to School supervisor, explains how they did this: “We have to supplement with less-expensive proteins, like beans . . . say chili with beef and beans.” For the fish tostadas, the high schoolers also had a fajita and pinto bean side dish. And the feedback on the fish tostadas was glowing.

“We made cilantro coleslaw and spicy crema sauce to go with the fish,” she says. “The kids loved them. And since we didn’t have a tortilla steamer, we put them on a tostada. Also a hit.”

OUSD is a pioneering district in the Farm to School movement. It partnered with Berkeley nonprofit Center for Ecoliteracy to pilot the first “California Thursdays” initiative during the 2013–2014 school year. By 2016, California Thursdays had 58 districts participating. The goal of this program is to connect California farmers to school lunch programs in order to support local food producers and ensure that kids get healthier meals.

Local sourcing for school lunches may seem like a no-brainer, but local fishers can’t compete price-wise with imported, farmed seafood or fish sticks made from pollock caught on the Bering Sea. At Real Good Fish, we’ve been told by very well-funded private universities that they cannot afford local seafood.

The United States imports 90% of the fish it consumes. Most of this is farmed in Asia. There is little known about the environmental impacts of (or human rights violations within) the industry as the fish pass through the long, opaque supply chain. But it’s cheap. Domestic seafood is more expensive in part because the U.S. has some of the strictest regulations in the world. The Magnuson-Stevens Act has ensured that depleted stocks get rebuilt, and guidelines help discourage subsequent overfishing. California, in particular, has created protections like limited fishing seasons, catch quota caps, observer coverage, and restrictions such as no-fish zones in our Marine Protected Areas. But it means that California fishers cannot compete in price with places that use slave labor and dynamite fishing—literally, it can be that bad—or with the massive trawlers scooping up billions of pounds of pollock each year from the Bering Sea and grinding them up to make fish sticks.

Turning the Bycatch into Lunch

But Lovewell began to envision a solution in the West Coast’s year-round black cod fishery. There is a strong market for these rich, oily fish in Japan, and one growing here as well.

At the same ocean depth is Pacific grenadier. This is not a pretty fish when pulled to the surface, and it does not have a market, so it is most commonly thrown back into the water dead. A fisherman told Lovewell that his boat alone was throwing back thousands of pounds of grenadier each year because there was such a small (practically nonexistent) market. Lovewell convinced some of the fishermen to sell him the grenadier, which he had filleted and frozen. He was able to sell them to the schools at a price point that fits their budgets, so with this program, food waste is reduced, fishermen are able to make more money, and kids are getting higher-quality, less-processed protein in their lunches.

More and better seafood may be coming to schools nationwide. U.S. Bill S.2529, called “A bill to amend the Richard B. Russell National School Lunch Act to require that the Buy American purchase requirement for the school lunch program include fish harvested within United States waters, and for other purposes,” is making its way through Congress. If passed, the law would require that the USDA must purchase only seafood caught in U.S. waters for use in schools. Another bill now advancing through Congress would double funding in the Farm to School grant program from five to ten million dollars, and that helps schools do business with local farmers and fishers.

Bycatch (the unwanted fish and other marine creatures caught during commercial fishing for a different species) could also be a big solution. Along the West Coast in 2013, the last year it was counted, 240 tons of Pacific grenadier, bycatch of the black cod fishery, was thrown back dead on the West Coast (according to Tara Duggin’s reporting a year ago in the SF Chronicle article: “Ugly Fish a Prized Catch for Bay Area School Cafeterias”). Sounds like a lot, but the Alaska bottom trawl fleet discarded over four million pounds of halibut as bycatch in 2013. That’s a lot of school lunches. We just need to create a logistics system for getting this wasted resource processed and to schools. Real Good Fish is able to do its own distribution for Bay2Tray because of the existing trucks, drivers, and other infrastructure of the CSF subscription program. Working with a distributor is cost-prohibitive given the price constraints.

The next big challenge is to convince kids, who may only ever have had fish sticks before, that fish in school lunches can be delicious.

In the classroom, Koepf is working hard to convince kids to try the fish and also to make the point that earning a living as a fisher isn’t a bad life. He asks for a show of hands of who might want to work on a fishing boat. About six or seven shoot up. One student asks about how you can become a fisherman. “You go down to the docks and ask for a job,” Koepf says. “You get up early, show up on time, and work hard.”

As we carry Koepf’s gear back to the parking lot, the kids wave shyly at us and run up to hug Mitchell. Koepf tells me, “I thought commercial fishing was hard work. It’s nothing compared to being a teacher.”

Journalist Maria Finn is the author of five books and has contributed to the Food & Environment Reporting Network,Sunset Magazine, and many other publications. She is currently creating a native oyster garden on her houseboat in Sausalito. mariafinn.com

Cheryl Angelina Koehler is the editor and publisher of Edible East Bay and author of Touring the Sierra Nevada, published by University of Nevada Press.