Real Good Fish | Blog | | Pickled and Smoked: Reasons to Get Excited About the Good Food Awards | Bringing you the freshest sustainably caught LOCAL seafood!
< Prev Next > 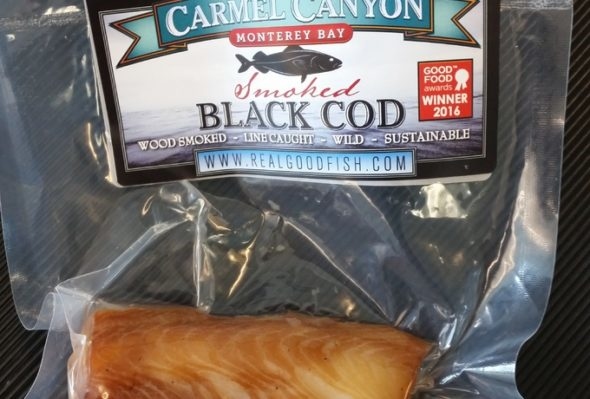 Pickled and Smoked: Reasons to Get Excited About the Good Food Awards

Preserved Fish is a new category in the Good Food Awards, a national initiative that recognizes craft producers from around the country. This is timely, as tins of smoked, salted, and brined seafood are on the brink of a culinary zeitgeist and push the seafood sustainability agenda. Chefs, fishermen, community supported fisheries, and an array of seafood companies are all invited to enter by July 31.

This could help shift how we eat seafood in the U.S. The most popular seafood consumed right now–tuna, shrimp, and farmed salmon–are often imported and produced without environmental and human rights considerations. The Good Food Awards are only open to U.S.-caught, -grown, and -processed foods. In the past years, smoked and pickled seafood had been a subcategory of Charcuterie. It now has its own, with subcategories for roe, rillettes/pates, salt preserved, water and oil packed, pickled, and of course, smoked.

Nialls Fallon, co-owner of Maiden Lane, a popular restaurant in NYC that serves seafood, still in the tin, is on the committee. While he admits that tinned seafood has had a bad wrap, it’s actually a way to preserve fish at their peak, like canned tomatoes. And it works well in his 600-square-foot restaurant. “By serving tins, we are able to have a large variety of different types of seafood, that are shelf-stable, sustainably sourced, and prepared before and during canning with the utmost attention and care,” he said.

Preserving seafood helps us diversify our diets and eat down the food chain.

Anchovies, herring, and sardines are super-nutritious and free of mercury and PCBs. These are often not used as food, but rather fertilizer and industrial farm-feed. They are highly perishable, and so preserving and canning them is a way of getting these fish a longer shelf life and offers consumers an affordable, easy way to get more seafood into their diets.

Warner Lew, whose day job is to manage commercial fishing fleets for Icicle Seafoods, has a side project smoking and canning herring caught in Togiak, Alaska. This species is fished only for its eggs, which are traditionally eaten in Japan to celebrate the New Year. The males and carcasses of females are essentially wasted. Lew decided to try and stop this by brining, smoking and canning herring. He’s taking up the Good Food Awards challenge. “I’ll put up Togiak herring against all comers,” he boldly claimed. But there’s another Togiak herring entry.

Eat Sea Creatures in Seattle will also be entering their Alaskan smoked herring this year. And these chefs know their way around seafood. Real Good Fish, the company I work for, will be throwing down with vinegar-salt preserved Monterey Bay Anchovies. We’d much rather see people eating these delicious fish than see them be used only as bait.

Along with finding good use for little fish, this category encourages using more of the fish, and reduces waste in this way as well. By smoking collars and bellies and brining roe or ikura from salmon and trout, we can take fewer fish out of the water, and get more value from them. This helps artisanal U.S. fishermen and women, along with indigenous fishing cooperatives produce value added products, and diversifies their incomes. It also can fill a gap when fishing is slow.

Up on the Yukon Delta in Alaska, the Yu’pik people used to rely on the strong Chinook (King) salmon runs for their economic survival. This fish run has been weak for the past several years and no fishing of Kings has been allowed. Kwik’pak Fisheries is a dockside buyer on the Yukon Delta that’s purchasing Chum, or Keta salmon, which is showing a strong return this year. This species doesn’t have the rich fat content of Kings, but it’s still very good, and highly sustainable, as they are fishing them with dip nets so they don’t catch Kings. The Yu’piks have been smoking salmon for generations, so their products are the real deal, and they are finding their way to a roe market. The eggs, also known as ikura, are highly sought after by sushi restaurants, and hopefully one day by the general public. They are rich, delicious, and powerhouses of Omega-3s.

And it’s not just small producers getting in on this growing trend. Patagonia Provisions, a food branch of the Patagonia outdoor clothing brand launched smoked pink salmon this past year. A plentiful wild Pacific species, it has long been under-appreciated. It has less fat than other species and so the texture and mild flavor are almost trout-like.  Patagonia is sourcing them from Lummi Island Wild, in Puget Sound. They are reef-netted using solar powered boats. The fish is caught and processed by their cooperative. Owner Riley Starks claims, “Pink salmon are the cleanest food available. They only live two years, and so don’t accumulate any PCBs.”

Along with sustainability, there’s the deliciousness factor. Imagine a mezze platter with preserved anchovy fillets, a hiking trip that includes rich smoked black cod rillettes, a simple winter evening meal of pickled herring in sour cream on rye. We are on the verge of something big, good, and delicious.