Real Good Fish | Blog | | Inaugural Taste of the Bay Aboard the Schooner, Fred B | Bringing you the freshest sustainably caught LOCAL seafood!
< Prev Next > 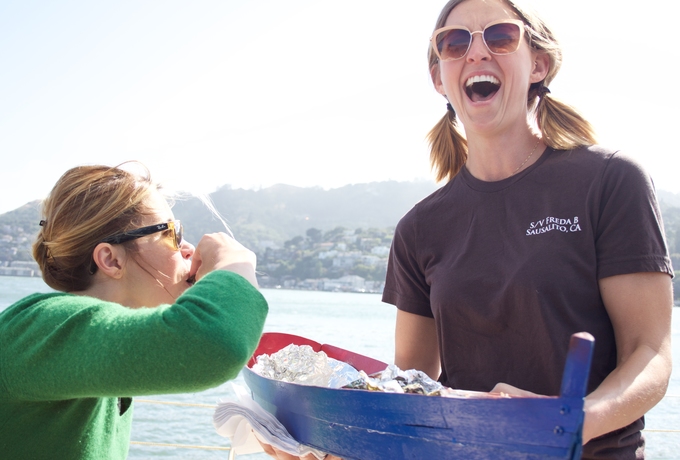 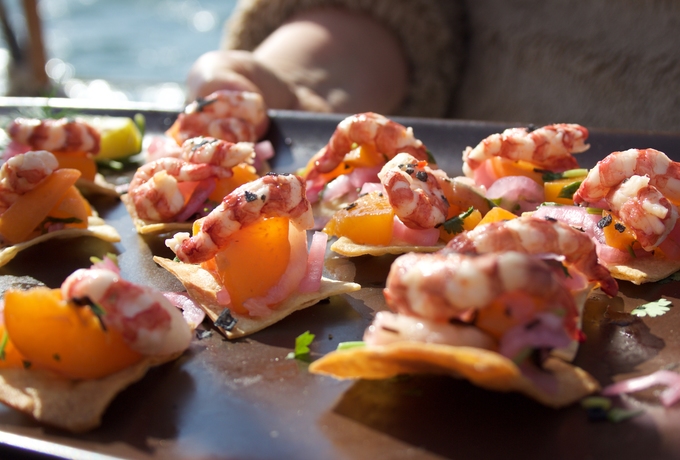 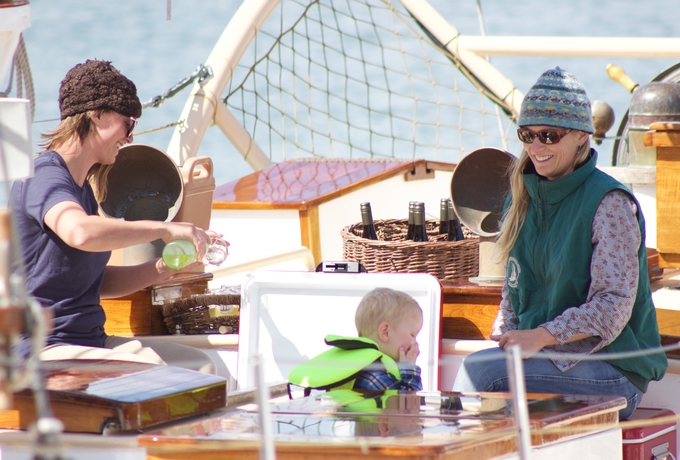 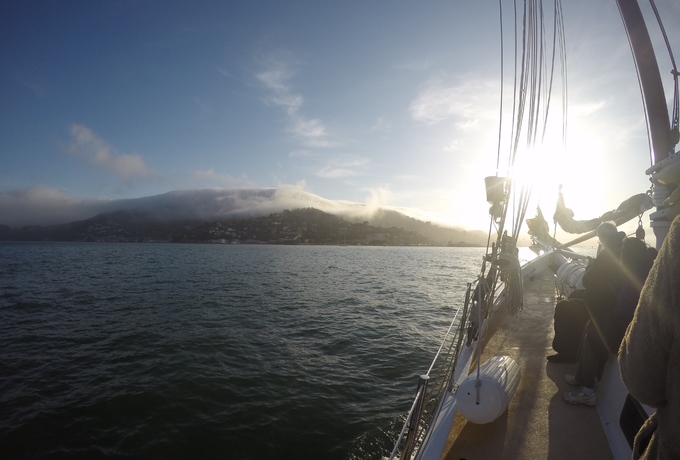 Inaugural Taste of the Bay Aboard the Schooner, Fred B

Last Sunday we launched on our first “Taste of the Bay” local seafood sail on the San Francisco Bay. It was collaboration with the beautiful 80 ft. schooner, the Freda B and David Johnson, of Davey Jones Deli in Sausalito and Real Good Fish.  The plan was to serve local seafood & wine pairings while under sail around the SF Bay, enjoying the beauty of shifting light and connecting people, literally to the currents and wave chop, the smell and feel of the sea while eating the creatures that come from it. We planned our menu with the goal of creating the most visceral way to experience our local bay and nearby ocean.

The day was blustery, with winds blowing about 25 knots, and a wave chop textured rippled the bay. Guests were greeted with raw Marin Miyagi oysters served with a mignonette sauce flecked with preserved cherry blossoms. Next, crudité platters served alongside olive oil infused with anchovies caught under the Golden Gate Bridge as well as preserved lemons and garlic.  These were paired with Sauvignon Blanc from Sonoma, which everyone held steady as we headed out.

The sails were reefed and we charged straight into the weather. The winds picked up. Our Captain, Adrian McCullough warned Davey. “It’s going to rough for a stretch. Wait until we hit the other side of Angel Island before you serve the ceviche.”

And so this how a ten course sampling menu gets served on a sailboat in 25 knot winds. The ceviche came out; Ridgeback prawns that had been marinated in lime juice and served with pickled apricot and onions on a fried wonton. The platters were passed and the crew refilled glasses with Chardonnay and we sailed by Alcatraz, with San Francisco, the shining Oz in the distance. There was jibing, tacking, and searching for a quiet spot on the lee side of Angel Island.  Rosé came with the next course, and Davey passed up salads tossed with a green goddess style dressing with SF Bay herring bottarga that he calls “Aphrodite.” When it became as quiet as it would probably be that day, bowls of chowder made with Carmel Canyon Smoked Black Cod got passed along with seaweed bread spread with uni butter, the wine pairing a Pinot Noir, and I gave a quick talk on the seafood and why it was special.

Oysters are great for the way they filter water of algae, letting sunlight through, as well as contour ocean bottoms, anchovies-eat the little fish, down the food chain so they are valued more and not turned into just bait and industrial farmed fish food, why black cod is abundant and uni a great choice, especially with the kelp forests decline. Just when I was getting to how magical wild salmon are, a dolphin arrived and totally upstaged me. When the excitement died down, I talked more about salmon, and learned from our captain that not only are they great for rivers, oceans, and land where bears and eagles scatter the nutrients they bring from the ocean, but he had worked in the rain forests up in British Columbia, and they found nitrogen from the wild salmon actually fertilized the canopy tops.

On the way home through Raccoon Straits, California King salmon sliders with wasabi aioli were passed around, followed by brown butter cardamom cookies and tea and coffee.  We wove between sailboats, the Golden Gate Bridge in the distance, and fog had started slipping over the Sausalito hills, filling in the gullies and laying a soft blanket over the town.  Guests departed, and we hope, a little more in love with the bay and knowledgeable about ways we can eat locally to support its well being.