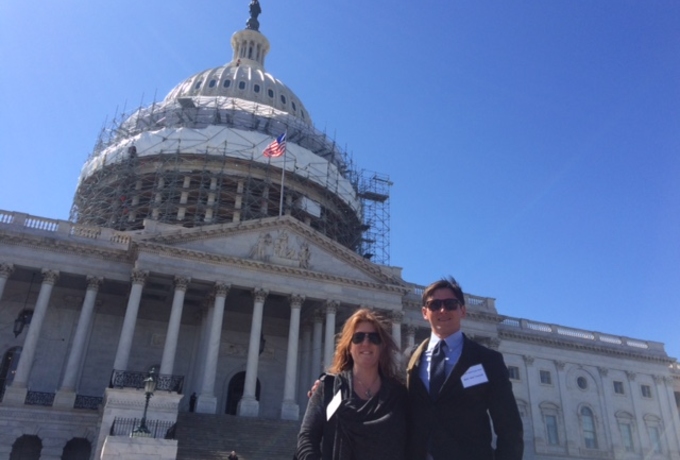 Lobbying for Fish On Capitol Hill

Last week I cleaned the cat hair off my suitcase (they nap there) and Alan dug deep into the back of his closet for his suit jacket and tie. We were gearing up to visit Washington, D.C., along with other fishing industry people from around the country, for the 40th anniversary of the Magnuson-Stevens Fishery Conservation and Management Act (MSA).  A consortium of non-profits sent us there to meet with politicians and tell them about our business and how the Magnuson-Stevens Act is responsible for the United States leading the world in seafood sustainability.

The MSA became law in 1976.  The primary objective at the time was to keep foreign fishing vessels out of our water, so a 200 nautical mile mark was drawn to replace the previous 12 nautical mile limit, and foreign boats were not allowed to fish inside that limit. The law was updated in 1996 and in 2006 by groups of bipartisan lawmakers to end overfishing in the United States and rebuild overfished populations. There were several other elements to those amendments that addressed concerns like the reduction of bycatch and using the best science available, but the core tenet was rebuilding and maintaining healthy fish populations.

As a result of this, 39 fish stocks have been rebuilt; in our area, this includes certain species of rockfish and Petrale sole, which are groundfish. In 2000, the federal government had declared the coasts of Oregon, Washington, and California an “economic disaster” due to groundfish stocks collapsing. The Monterey Bay Aquarium's Seafood Watch Program listed them as “Red” or Avoid. A number of efforts were made by the fishermen and environmental groups to develop a recovery plan. It was successful and the rockfish and Petrale sole had remarkable rebound. In 2014, Seafood Watch re-evaluated the fishery, and many of them were ranked as “Best Choice.”

The problem some fishermen and local seafood companies found was that when a species is overfished and makes the red “Avoid” list, chefs won't use it and consumers won't buy it. And so when the stock rebounds, it’s a lot of work to bring it back to chefs and the marketplace. Overfishing takes quite a toll on the ecoystem and that requires recovery as well, so never overfishing in the first place is the best plan for everyone involved.

Currently, special interest groups have convinced politicians to try and amend the Magnuson-Stevens Act and add loopholes that would allow for overfishing. Recently, the House passed H.R. 1335, a reauthorization bill, that if enacted, could significantly turn back the clock on the progress made in improving sustainability for fisheries in the United States.

Alan and I visited with the Legislative Assistants of many California Congress members, including Michael Honda from Silicon Valley, Zoe Lofgren from San Jose, Jared Huffman from Marin/Sonoma, and Sam Farr from Monterey. We also  met with aides and assistants to Senators Barbara Boxer and Diane Feinstein.

We explained to them that we can’t compete with imported seafood on price. An astounding 90% of seafood in the U.S. is imported, most of it farmed and primarily from Asia. The human rights and environmental standards for their products can be extremely low. We will never have lower prices than a seafood supplier that uses slave labor, or one that dynamite fishes or uses aggregation devices. And we never want to.

We are committed to valuing our ocean and the people who work in this supply chain, from fishermen to processors to delivery people. California maintains some of the highest standards in the country when it comes to sustainability, and the U.S. is a world leader in fisheries management. Real Good Fish members are early adaptors and an important part of this movement that we hope will set standards nationally and internationally.

The Californians on Capitol Hill were all very receptive to our message and promised to keep an eye out for H.R. 1335 and fight against it. And so, with our work done, we went out to eat D.C.'s local crabcakes and oysters with the other fishing industry people and celebrated the anniversary of the most important and far-reaching fisheries management legislation we have: the MSA.