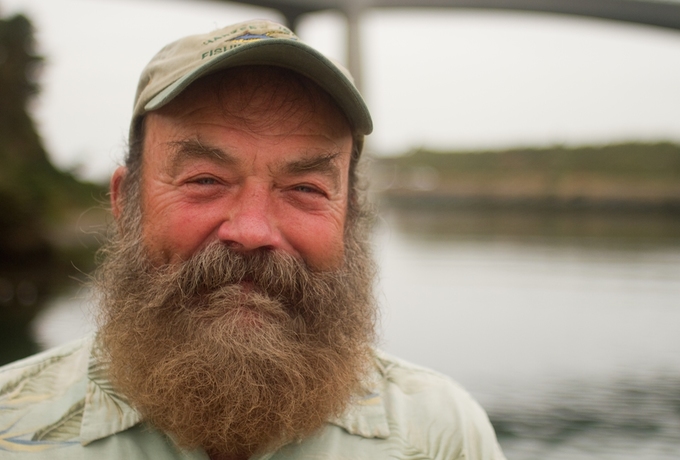 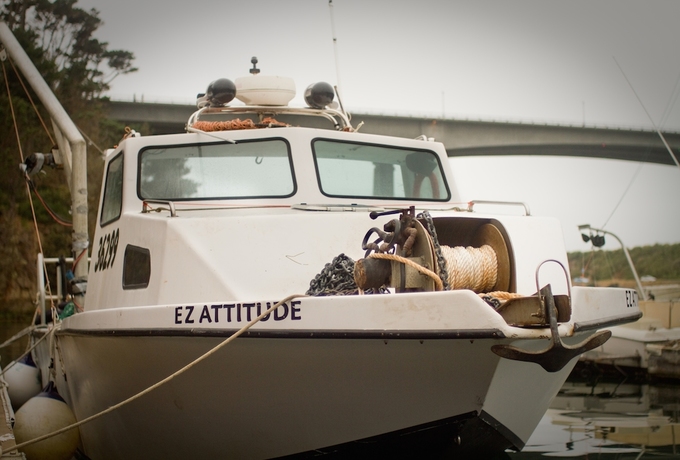 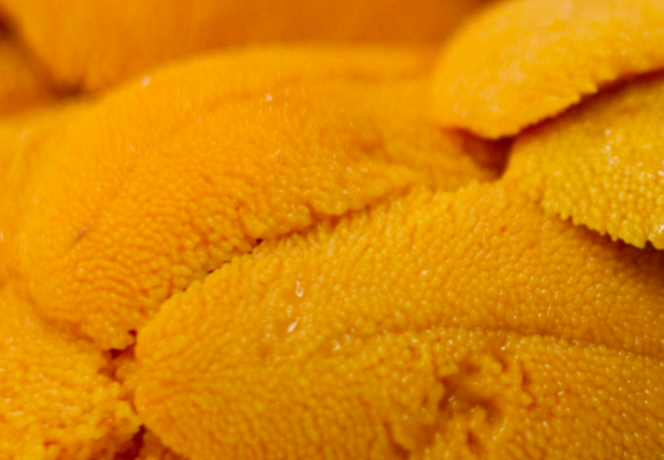 Uni are shaped like small, golden tongues, and have a custard-like consistency. The sea urchin gonads are the very essence of the ocean, and not an easy sell in the United States, where people often disdain seafood that tastes like seafood. But that’s changing. Tom Trumper and his sons are Northern California sea urchin divers and uni processors who are wooing diners away from shrimp scampi and tuna salad and into their underwater world.

I first met Gary Trumper when he handed me a paper cup with a golden hued, perfectly curled little sac of textured goo. He splashed sake into the cup, and said, “Here, it’s an uni shooter.”

The first time I had tried uni at a sushi bar, I thought I was eating something cleaned out of a fish tank—it was gooey and had a strong iodine flavor. Then uni made its way out of sushi bars, and tasting menus started to feature it. I had tried it at Quince restaurant in San Francisco, a mere sliver served with kaffir lime granita, and it was not bad at all. Waterbar blends it into a butter-white wine sauce served with seared scallops and coal roasted eggplant. Son of a Gun in Los Angeles has bucked seafood tradition and serves it with burrata. Small amounts of uni for umami depth, I came to appreciate.

I looked at the generous dose of echinoderm sperm and back at Gary’s face. It was deeply tanned, with dashes across his forehead that told of outdoor adventure. In 1987, he was working on a sea urchin boat in Southern California that sunk. Three crewmembers died and the rest, Gary included, spent 17 hours clinging to flotsam in the water until they were rescued.

His son Robert was also working the table. “We dive for these ourselves on the Mendocino Coast,” he told me. “My dad, me, and my grandfather, Tom. He’s 67 years old.”

These men risked their lives diving for the purple pincushions with soft uni cores. Like all commercial fishing, storms and shipwrecks are always a possibility, air chambers can malfunction, and there’s one uni diver in Ft. Bragg that sports a scars left from 500 stitches he got after a Great White took a taste of him. I had no choice but to accept the shooter. I tilted the cup and the entire piece slithered into my mouth and I took a cautious bite. My life changed.

The texture was firm and silken and the uni flavor was reminiscent of flowing kelp and Pacific upwells. Mellifluous sweet notes mingled with a bright, briny base. The lingering tones reminded me of everything beautiful and benign to be found around coral reefs.

“You want to try one with Ponzu sauce?” Gary asked.

I did. By my third piece, I didn’t want any sauce masking the flavor.

Then I met the patriarch, Tom Trumper. He sported a wild beard, and has bright blue eyes that gleam a little, like they were stinging from being open under water.

He is central to the uni industry in California and currently has three sons, one grandson, and a cousin who all dive on sea urchins together; his daughter, Autumn, is co-owner in the business Pacific Rim Seafoods. His wife Judy has been everything from a diver to salesperson. I was in the presence of the Northern California uni dynasty, the people who taught San Francisco about this “California gold.”

In 1975, Tom Trumper was working as a diver for oil fields in Louisiana, but pursued Judy, the woman who would become his wife, out to Southern California. He saw a help wanted ad for sea urchin divers, and after his first trip out, he never went back to the oil rigs. He told me that at that time, only 20 guys were diving and the range was limited to southern California, from San Diego to Pt. Concepcion. The yen was strong in Japan and overnight shipping had just become possible. Markets over there were clamoring for California sea urchin.

“California has the best uni in the world, due to our kelp situation,” Tom said. “Sea urchin will eat anything—beer cans, rocks, you name it. But the ones that eat kelp are by far the best. We only harvest from around kelp.”

At the time, there was fear about the size of the sea urchin population and itsconsumption of California kelp bed. “The elimination of sea otters and the fishing of durophagous fish (those capable of eating shellfish and sea urchins) had an effect on sea urchins," John Lawrence, a marine biologist and author of Sea Urchins, told me in an email. "Elimination of these predators allowed sea urchins to move from shelters onto exposed bottoms and the populations increased.”

As Tom explained it, word got out about the sea urchin bonanza, and by 1986 he estimates there were 200 divers. The California Department of Fish and Wildlife opened Northern California to sea urchin harvesting, the number of divers statewide exploded, and by 1987, over 700 divers held permits. In 1988, 49 million pounds were taken from California’s waters. 90 percent were shipped to Japan. Harvesting was wide open, seven days a week, year round. A new California gold rush was on and it threatened the coastal ecosystem.

When seafood trends hit and overfishing occurs, it doesn’t just put the target species in peril, but the entire ecosystem. Sea urchins are referred to as “keystone herbivores” as they graze algae. John Lawrence wrote to me “Sea urchins consume large quantities of algae. Their elimination would be expected to result in an increase in algal growth.” When algae grow unchecked, coral reefs are smothered. (http://waittinstitute.org/wp-content/uploads/2014/...) According to George Matsumoto, Senior Education and Research Specialist at Monterey Bay Aquarium Research Institute, “California doesn’t really have coral reefs, but the urchins keep some of the understory algae in check. So, they are important in the ecosystem as both herbivores and as food items to fish.

Tom and a few other urchin divers organized and went to California Fish and Wildlife and asked for regulations. The group and state management came up with three: they must be over 3.5 inches, some days during the summer are closed to harvesting, and divers would be required to have commercial permits and only a limited number would be issued. Now there are 300 permits in the state, and Tom estimates that about 150 are being actively used. Any more than that, he predicts, are too many.

While diving into the frigid unknown has challenges, the ever-changing market for the product was even tougher to navigate.

In 1999, Tom co-founded Pacific Rim Seafood, which he now runs with his daughter, Autumn. That year, the price from Japan was soft, and so they had to cut out the middlemen. In many seafood supply chains, there can be as many as 5-7 buyers before a product makes it to the market. In order to break this chain, he needed to create a domestic market.

Tom and Judy loaded 14 trays of uni in their VW bus and drove to San Francisco. By this time, sushi bars were ubiquitous in the city, and chefs loved their uni. Tom and Judy met with customers and gave samples and talks in the restaurants. Then Tom noticed that chefs who bought on a Monday were still serving their uni on a Friday.

“Before I became a processor, it took the distributors 5 to 7 days to deliver it. By that point it gets a strong, yucky flavor. By cutting out the middlemen, we could get it out much fresher," Tom told me. So they started bi-weekly deliveries to San Francisco. “People eat our uni two days out of the water,” he said. “It’s a huge difference.”

The Ft. Bragg boat harbor is in the mouth of the Noyo river, and picturesque forested hills rise up around commercial and sport boats, waterfront restaurants, kayak rentals and a few dodgy sailor-in-port hotels. Pacific Rim Seafood has a waterfront spot so they can unload their boats directly to their small processing plant. It's a no-frills operation, with low ceilings and locker rooms that could use a paint job. But it’s spotlessly clean and efficient. The people who work there pulled me aside and whispered tidbits about Tom. “Did you know he’s a war hero,” his truck driver Brian Wagner told me. “He did two tours of Vietnam.”

Sergio Estrella, manager of quality control, said, “When the processors have to put in 12 hours, Tom works right next to them for 14 hours.” Estrella handed Wagner large wet-lock boxes full of uni bound for Dallas and Houston, TX.

“We can’t hardly keep up with all the restaurants in the United States that want uni now,” Estrella said. When harvest is low, like it has been recently, they sell 90 percent of their product in the United States, the rest is shipped overnight to Japan. When it’s booming, that number comes down to about 60 percent.

Counterintuitively, the rise of uni sales in the United States might not impact the sea urchin stock adversely. In fact, it’s possible that domestic consumption might be good for it. In his book American Catch, Paul Greenberg argues that eating our locally landed seafood instead of selling it internationally means that we will value our waterways more and take measures to protect the ecosystems.

“There is no more intimate relationship we can have with our environment than to eat from it," he wrote.

In an email exchange we had about uni, Greenberg said that “sea urchins are sensitive to over harvest and simply eating them doesn’t protect them. But having a direct connection with what we eat from the sea can compel us to protect coastal environments from pollution and other forms of habitat degradation."

"Moreover, it’s always better to eat from a country with sound fisheries management policies," he added. "The US has reformed its fisheries policies significantly in the last 20 years and we are today among the most progressive of fishing nations. Eating from a system with sound management can be a positive feedback loop."

Despite the strong management in place in California, this year’s strange weather patterns are taking a toll. The West Coast normally has springtime upwellings. During this, nutrient rich waters move from deep to shallower areas, and these trigger the kelp to bloom. “By the end of July, there’s usually lots of new kelp,” Tom explained. “But this year, with such warm water temperatures, we aren’t seeing it. So the urchins are skinny.”

However, he pointed out that the massive starfish die off that happened last year is helping some sea urchin populations—though sea urchin in Southern California arealso having a mysterious die-off—as starfish are their predators. He expects an upswing in harvest-sized urchin in three years due to the starfish decline.

“El Niño hits every 15 years, we’ve seen it before,” Tom said. “And the starfish are coming back, so that will balance out. We just don’t want to lose the market for uni while nature takes her course.” He knows better than anyone, the number of Americans who are willing to dive deep into this rich delicacy, is only growing.