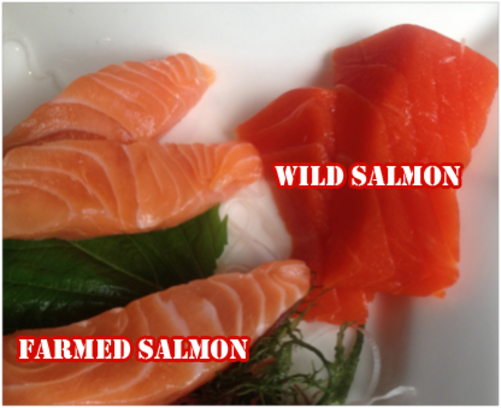 Let’s face it, Real Good Fish members (and employees) are spoiled when it comes to seafood. Most of the population thinks calamari is chewy. This is only because theirs has been to China and back. We’ve had the pleasure of Channel Island Ridgeback prawns when others are still eating frozen shrimp from Thailand that leaves an aftertaste of Clorox.  And shockingly, it’s legal in the United States to treat ahi tuna with carbon monoxide so that it retains its mauve coloring.  Our members never have to worry about this. We have become spoiled, fussy seafood eaters.

When visiting a restaurant, it’s easy to ask your server questions. Despite seeming “Portlandia”, the server and the chef then know that customers care where their seafood has come from. With slavery, overfishing, and rampant seafood mislabeling going on, chefs should care where they are sourcing their fish from.

She wrote: “Last night I had dinner at a friend’s house and they were serving salmon. Well, on the platter it looked different and I couldn't figure out what it was and the I realized it had to be farm raised. The color of the fish was a weird red color reminded me of hot dogs you get in the Philippines. I was in horror wondering what I was going to do because I was like, I'm not ingesting that!! I sort of hid it under my salad. My partner caught on and he took one for the team and snuck it on his plate when no one was looking. So I just want to thank you for educating me as a consumer on Farm Raised Fish and how to spot it. “

Fortunately for this member, she had a boyfriend there who was able to “take it for the team.” Other options might include cutting into small pieces, and then discreetly moving around and hiding on your plate so it looks like you ate it.

One I’ve done before when offered farmed salmon at a potluck, is swear that I was too full to eat another bite. So if it’s questionable seafood, fill up on bread. You can also claim that you “might have an allergy.” For vegetarians and vegans, there's a lot of Emily Post type advice out there, like "offer to bring a quiche." I doubt a guest would mind if you showed up with some smoked black cod and information to

Do you have any stories to tell? How have you resolved this in a polite way?