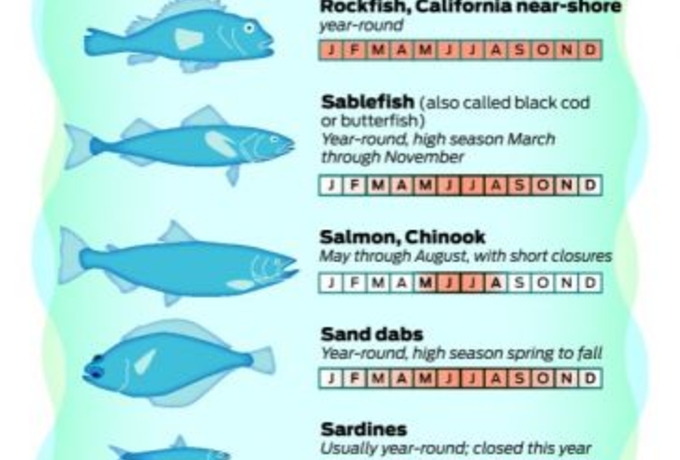 The San Francisco Chronicle's Shout Out to Seasonal Seafood & CSFs

Food writer Tara Duggan did a great seasonal seafood chart of California in 2015 and wrote an article along with it, The seafood calendar: What’s in season locally.

“A lot of the seafood you see at the grocery store is stuff that’s been frozen. It kind of erases the seasonality, and you end up defaulting to always getting the same thing,” says Heather Wooten, 32, who receives weekly shares of fresh local seafood from the Siren Fish Co. community supported fishery.

Becoming local seafood savvy does require a little bit of diligence in terms of checking labels and asking a lot of questions about where your fish comes from. While Chinook (king) salmon and Dungeness crab seasons are defined by the California Dept. of Fish and Wildlife, many other types of seafood can be caught year round or until a quota is reached. Others, like albacore, don’t have officially defined seasons but come to our area only during certain months.

Even during salmon season, there may be no local fish in stores or farmers’ markets when it’s too windy for smaller fishing boats to go out, which happened earlier this spring.

Weather can have other effects — for example, the mysterious “blob” of warm water hovering off our coast since 2013, which some argue is a factor in the drought, also might have accounted for the slow start to the local salmon season. Some fishermen think it kept the squid in deeper, colder waters, which in turn kept the salmon from venturing close to shore.

Seafood names are not particularly helpful when you’re trying to figure out what’s local. Just because the snowy-white, meaty fillets we see in stores are labeled California halibut, that doesn’t mean they were caught in California waters; they might have been caught in Mexico (to find out, check the country of origin listed on the label or above the display) or by a huge trawling ship way out in the Pacific that unloaded in California.

Kenny Belov of the sustainable-seafood purveyor TwoxSea buys the species only when it is close enough for local rod-and-reel fisherman to catch, generally spring to fall.

“Other times the gear method changes and you’re more likely to find trawl fish,” says Belov, which means the halibut was caught with large dragnets that can damage the seafloor and end up with bycatch, unintended species that often get thrown away. When you see fish called “California halibut” in stores or restaurants, ask how and where it was caught.

In general, sustainable-seafood advocates say buying wild or farmed seafood that is labeled as being from the United States is a much better choice than imported seafood because American fisheries are so much better managed. Sheila Bowman, senior manager of the Monterey Bay Aquarium’s Seafood Watch program, says that in general the best-managed fisheries have the most defined seasons.

Still, even if you know the seasons, there’s no guarantee that the fish will be available. For example, sablefish, also known as black cod, can be scarce at stores when it overlaps with the more lucrative Dungeness crab season, says Kirk Lombard of Sea Forager Seafood. That’s because fishermen can make more profit from the crab and don’t bother to catch sablefish.

Other than going to retail stores, farmers’ markets or local harbors that sell local fish, joining a community-supported fisheries program is a good way to navigate the confusing jumble of seasons and to get access to local seafood year-round, including highly perishable options that are usually only available frozen, like squid and anchovies.

“This is a wild product,” says Anna Larsen, founder of Siren Fish Co., who keeps her CSF members up to date on seasonal changes through a monthly newsletter.

For customer Wooten, an urban planner who posts Instagram shots of the fried smelt and pickled herring that she and her husband prepare in their North Oakland home, one of the main reasons she joined a CSF is to give local fishermen a market — one that extends beyond the peak of crab and salmon seasons.

“We live at a time when the fisheries of the world are in this very precarious place. There are a lot of big things, like climate change and pollution facing them,” she says. “When you’re buying fish that’s sourced locally from responsible sources, you’re also opting into a system that’s managed, that’s regulated, that’s intentionally going to be able to feed people for many generations to come.”