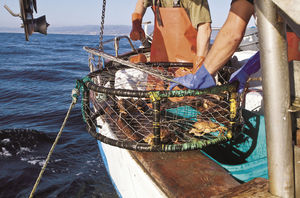 Great Write-Up About Our Recent Changes by Monterey County Weekly

There’s a certain poetry to what Local Catch Monterey, freshly renamed Real Good Fish, is accomplishing in its mission to connect local seafood lovers with local fishermen via a CSA-style subscription service.

It is working slowly and patiently to cure a system built for people demanding fish quickly and conveniently.

It offers a regional alternative to a national fishery that bizarrely imports 90 percent of the seafood we eat and exports a third of what we catch.

It invests in close connections to food so frequently distanced from its source and the seasons.

It brings a brave approach to perishability with the hope of making change that doesn’t ever go bad.

Its co-founder and mastermind, Alan Lovewell, is a man who understands the way things works – he fixes cars and replaces his own iPhone glass using toothpicks to tighten the tiny screws – and has tasked himself with fixing something incredibly complex that’s been simplified to a painfully incomplete data point: price.
“When we’re buying fish,” he says, “we’re not valuing local jobs, the transportation and lower carbon footprint.”

The program works simply enough: Buy a weekly subscription for $22, which means 1-2 pounds of seafood to feed 2-4 people. It sounds vague, but a Monday email alert allows more precise planning. Pick up the haul at one of the many drop points on Tuesday. Embrace adventure, as it can be anything from anchovies to oysters, and the accompanying education, in the form of fisherman lore and fun recipes. And love the yum: the petrale sole I took home last week was so fresh it barely needed olive oil, garlic, lemon, herbs, an aluminum foil envelope and the oven before we were swimming in clean flavor.

Eaters get great fish; fishermen get a reprieve from the pressures of failing fisheries, marine-protected areas, catch quotas and fickle market forces. Or as now departed co-founder Oren Frey, a National Marine Fisheries Service Sea Grant fellow like Lovewell, put it, “People get a good price [and] fishermen get predictable demand.”

The rebranding and accompanying strategic shifts come with its third anniversary, and are designed to draw more members into that exchange.
The evolving approach includes a new office and a slick new website with FAQs, fishermen profiles, fresh recipes (Moroccan fish tagine! Abalone Meuniere! Baked sea bass!) and a blog that covers everything from the malignance of mislabeling to how to open an oyster.

Other developments both innovative and practical will help lift membership from around 500 to a goal of 1,000, drawing from further points north, something that’s already being realized with the recent addition of two Marin drop spots. Bay to Tray Program takes grenadier, a fish that’s unintended bycatch and typically discarded, and pops it in local public school lunches – instead of oft-imported, farmed fish – in tasty things like fish tacos and enchiladas. Other schools are taking notice. A partnership with Kitchen Witch Bone Broth in Santa Cruz means the RGF bones and heads simmer into delicious and fortifying broth, furnishing another instance of a former waste stream suddenly becoming something wholesome and valuable. New add-on options for subscribers allow for more creative and diverse seafood options like smoked salmon bellies, local squid and even calamari kimchi, and complimentary spices like gomasio from Lightly Salted and sauce-friendly canned produce from Happy Girl Kitchen.

A growing staff, starring new hire Maria Finn, enhances marketing and member services while pulling in more members from the other bay area (San Francisco), and creating more pickup spots here. Another delivery vehicle, or “Fishmobile,” helps there too.

Relationships with suppliers like Del Mar Seafoods in Watsonville and Sea Harvest in Moss Landing, which occupies the space above the new HQ, are deepening to maximize efficiencies.

“There’s a lot of support and capacity in the community,” Lovewell says. “So much of our seafood is going to Asia, or the East Coast. A lot goes to restaurants as well, but eaters don’t know where it came from or who caught it. That’s where we come in. The opportunity we see now that we’ve created this market is to develop the market.”

Lovewell will be there after time in Astoria, Oregon, for the FisherPoets Gathering where the main two ingredients are fishermen and, yes, poetry. He dropped some on me unintentionally before he left. “Getting rich quick is building apps of little or no value in 2-3 years,” he said. “Building and changing a community takes years and years, investment and investment, a lot of patience, a lot of energy, a lot of heart.”