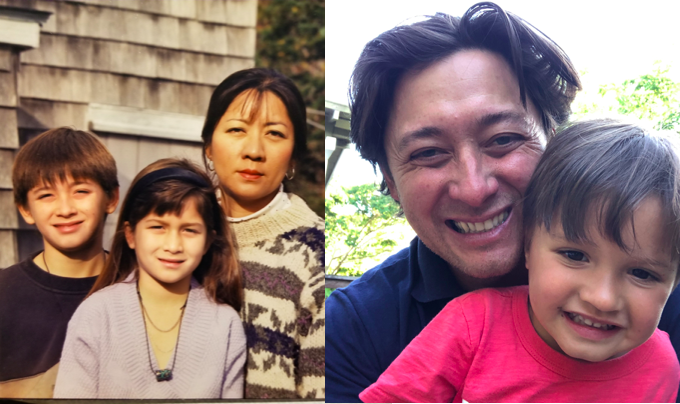 *Image L-R: Alan Lovewell with his mother & sister during childhood and now with his son, Luca.

The countless stories about acts of violence and increasing racism against people of Asian and Pacific Islander descent are incredibly heartbreaking. The news of the devastating mass shooting in Atlanta amplified the issue, calling many community and national leaders to acknowledge the gravity of anti-Asian and Pacific Islander racism. As an Asian American and as Cofounder and CEO of Real Good Fish, our organization stands against this manifestation of hate and division that threatens this country’s very constitution. Racial identity should not factor into our right to freedom and access to the American dream. Racial identity should certainly not determine how safe we feel going to work, going to school, spending time with family, and going about our everyday lives. We stand with the communities and individuals who are fighting for their fundamental rights. In solidarity with any group subjected to oppression and violence, we need to make changes that address these systemic abuses and inequities. Whether the solutions are small or large, the victims of past atrocities deserve our resolution and commitment to change to avert future repetition of the past.

How do we reverse the trends of racism and violence that threaten the most important pursuits of our democracy? It's a tough question to ask. I believe the answer is rooted in a greater understanding of where this country came from and how the perception of race in America is shifting dramatically due to a widening American political divide and expanding global experience. On a personal level, it is crucial to recognize we are products of our upbringing, conditioned by parents, friends, our education, community affiliations, and more. Each of these factors has shaped our worldview. Watching my 3-year-old son play “find the difference,” where he has to cross out the one thing that doesn't match the rest—you could see how without proper context later in life, differentiation exercises could negatively impact his views on race. This is perhaps a stretch, but it’s hopefully a simple example of how deep the issues go.

Without a doubt, the COVID pandemic became another rift in our country's social fabric as we faced the challenge to find answers, solutions, and cures to resolve its crippling effects. As we watched our politicians, neighbors, friends, and family members struggle to cope with the chaos, the already unglued state of American politics became further stressed. At times, the media and some of our government leaders pointed to China as the source of the problem. Some Americans, frustrated with the pandemic, have directed their reaction toward people of Asian and Pacific Islander descent. This reactionism is the bedrock of the environment that led to the incarceration of persons of Japanese descent during WWII. Similar to our present malaise, many of our fellow citizens became unglued and resorted to fear, hate, and extra-constitutional behavior in the name of justice and retaliation. There’s no easier response than to identify a scapegoat, especially the most vulnerable. We must understand that this approach leads to pain and creates more pain, inciting fear, creating more fear, perpetuating division, which creates more division. I ask, how can we as Americans sift through the murky madness to find a unifying truth that unites us all in common cause and identity—one that isn’t reactionary and rooted in fear, but in solidarity? A truth that reminds us of our shared humanity.

As an Asian American, more specifically, half Chinese and half white, I have had to confront the topic of race more personally. Many recent blogs, articles, and reflections of Asian Americans relating to the sad tales of increased racism mention the oft-quoted idea that we are a model minority. What does that mean? It means that society has expected us not to speak up, and our survival and progress have been contingent upon our adherence to that expectation. In many cases, Asians have accepted our position in society’s racial hierarchy, and those fighting for racial justice are often suppressed. Traditional Asian culture for many has reinforced this narrative, however, there is no question that the most recent generations are not only questioning but challenging these expectations. Reflecting on the Chinese side of my heritage and upbringing, I see racism in America more clearly. On this side of my family, my aunts and uncle only associated with other Chinese families. My 104-year-old grandmother—who immigrated to the US in the 1960s—never had to learn English and has lived comfortably in the protection of this community. This protected them while also isolating them from assimilating into the melting pot of America. My mother, however, took on a much more rebellious position in her desire to assimilate—rejecting much of her parents’ culture and quickly looking outside the bounds of her family heritage. In the pursuit of her marriage to my father, a white American, both were subject to significant racial bias from both sides. I’m surprised it didn't tear them apart—after all, both, suffered ostracization from the resulting fear of deviating from a staunch cultural identity and tradition. How this affected my upbringing is fascinating to reflect on. For my mother, teaching my sister and me Chinese was not a priority. We had much more of a white American experience, especially considering we grew up on Martha’s Vineyard. As young adults, my sister and I both lived in China at different times, with the same mutual interest: searching for that side of our cultural identity withheld from us. Both of us were quickly confronted with the reality that we were not accepted readily by our Chinese peers as culturally Chinese because of our mixed racial identities. This is not to say we weren’t treated well and hospitably, in fact, I think our Americaness was fascinating and of interest on its own, especially with the younger generations. Nonetheless, our mixed Asian roots were received with a mixed response because we were different. Speaking for myself, I’ve had to develop a cultural identity that is much more personal and bespoke than the typical way of identifying large groups of people that share common blood, heritage, or culture as one contiguous whole. To a certain degree, my racial ambiguity has also afforded me protection in this regard both personally, how I relate and think about it, and socially, how I stand up passively or actively.

The point of this reflection is to say that race and cultural identity are a collection of stories and adaptations at a personal level—the hard lines of race are more fluid in this day and age. Even in the purest sense of racial and cultural identity, some anomalies create more commonality than differentiation. There was a time when this was not the case, but I think it is critical to understand that each of us is connected in an increasingly globalized and interwoven world. If we can take a personal approach to this issue, we can recognize our shared humanity. We can hopefully empathize with the human desire for acceptance and safety. If we can promote an education system, social system, and political system that embraces the dynamic and fluid nature of race in this country, we can find a shared goal worth fighting for. In recognition of historical oppression and exploitation, we have to factor in those underlying systemic educational, social, economic, cultural biases, and traditions that threaten our collective progress. We certainly need to question and restructure the systems that organize one race in a hierarchy above another.

What does this all have to do with our work at Real Good Fish? Everything. We hope that the American communities we support on land are as diverse as the ecological communities we support in the sea. Every living creature deserves to feel valued. Our fight for sustainable food systems and healthy oceans cannot progress if members of our communities are still fighting for their basic rights. It is up to each of us to find that connective narrative that binds us together in greater understanding and appreciation. It's important to remember that good is the only thing that can bring about more good. We all have a place. We are all needed.

Here are some organizations that we admire for doing great work in the community that helps to educate, expand awareness, advocate, and raise funds.